Death, the best invention of life

I was reading through CNN’s news page and the caption (the title of this post) under this picture of Steve Jobs intrigued me so much I had to follow it.

The link led to a page with three videos highlighting Steve Jobs’ life. I decided t0 watch the middle one entitled “No one wants to die.”

This video (see below) was taken at a university graduation ceremony in 2005 after Steve Jobs was first diagnosed with cancer and had apparently beaten it. In this video he reflects on the critical role of death in defining what was important to his life.

None of us wants to die and neither do our congregations or the church we are part of. And yet it is only in recognizing the closeness of death and the need to die that we as followers of Christ and as people of Christ’s ecclesia can hope to participate in God’s mission of life. 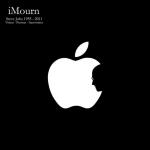 I’ve discovered “Busted Halo,” an online magazine for spiritual seekers sponsored by the Paulist Fathers. Today, like many other sites, they featured an article entitled  Think Different by Tom Gibbons and inspired by the death of Steve Jobs, founder of Apple.

The article highlights for me the alternate story the church is called to be as part of God’s mission.

I leave you with a piece of this article and a video which emphasizes this point.

I have to confess, the part of me that has loved Mac computers for as long as I can remember sometimes strafed at the idea of becoming an official member for another worldwide organization for whom the slogan “Think Different” is not usually associated. But that’s when I remember that while “thinking outside of the box” is not typically a value that my church holds, it does often force me to think different in other areas of life — something that I might not have done before. And I am also reminded that the church, like Apple Inc., was started by somebody who would easily fit the commercial montage that begins with, “Here’s to the rebels.”

But that conversation can be held another day because today is a day to honor those individuals who have reminded us about the limitations those communities can sometimes impose, the individuals on whose achievements we stand because they chose to “think different.”